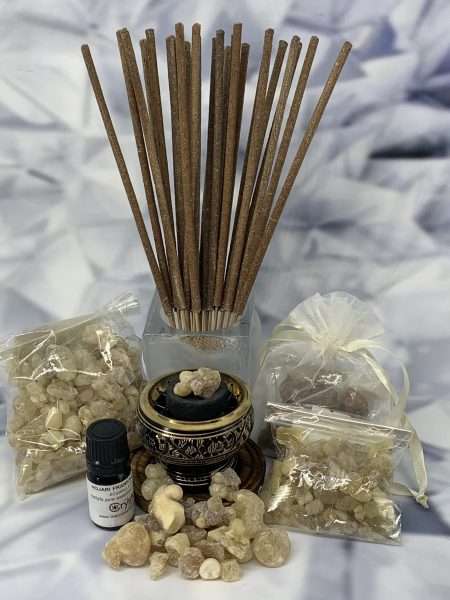 Frankincense and Myrrh are both resinous gum, a fluid that oozes from the bark of shrubby trees.
Oils are extracted from the gum and the purest oils are extracted using steam distillation. Today most of the Myrrh and Frankincense are produced in the southern Arabian Peninsula (Oman, Yemen) and in northeast Africa (Somalia).

Both Frankincense- also known as Olibanum and Myrrh have been traded in the Middle East and North Africa for upwards of 5,000 years. It is believed that the Babylonians and Assyrians burned them during religious ceremonies. The ancient Egyptians bought entire boatloads of the resins from the Phoenicians, using them in incense, insect repellent, perfume and salves for wounds and sores, they were also key ingredients in the embalming process. Myrrh oil served as a rejuvenating facial treatment, while Frankincense was charred and ground into powder to make the heavy kohl eyeliner Egyptian women famously wore. Sacks of Frankincense and potted saplings of Myrrh producing trees appear on murals decorating the walls of a temple dedicated to Queen Hatshepsut, who ruled Egypt for roughly two decades until her death around 480BC.

According to the Hebrew Bible, Frankincense and Myrrh were components of the holy incense ritually burned in Jerusalem’s sacred temples during ancient times. The ancient Greeks and Romans also imported massive amounts of the resins, which they burned as incense, used during cremations and took for a wide variety of ailments.

By this time, medical practitioners had recognised and documented the substances antiseptic and anti-inflammatory and analgesic properties, prescribing them from everything from indigestion and chronic coughs to haemorrhoids and halitosis.

Myrrh appears with more frequency than any other plant substance I the writings of the Greek physician Hippocrates, who revolutionised the field of medicine in the fourth and third centuries B.C. The Roman historian and botanist Pliny the Elder, who recommended Frankincense as an antidote to hemlock poisoning, wrote in the first century A.D that the pricey dried sap had made the Southern Arabians the richest people on earth.

At the time Jesus is thought to have been born, Frankincense and Myrrh may have been worth more than their weight than the third gift presented by the wise men gold. But despite their significance in The New Testament the substances fell out of favour in Europe with the rise of Christianity and fall of the Roman Empire, which essentially obliterated the thriving trade routes that had developed over many centuries. In the early years of Christianity, incense was expressly forbidden because of its association with pagan worship, later however, some denominations, including the Orthodox and Catholic Church, would incorporate the burning of Frankincense, Myrrh and other aromatic items into specific rites.

Frankincense has astral and esoteric properties that are connecting us to a higher frequency by opening up our third eye and Myrrh is our conduit back to the earth enabling us to ground and stabilise our energies and both will open our hearts to enable a state of more joy.